Hello all, I'm in the process of moving my web-presence from this site to my new one: www.wjscience.com.
Please give it a visit, and tell me if you like it.
Posted by Tidbit77 at 5:22 PM 7 comments:

Well, I figured that I should probably post a video of Fusor Mk. II to Youtube, so I made a quick video designed to serve as somewhat of an introduction to the reactor. So here it is:
Posted by Tidbit77 at 1:23 PM 3 comments:

Since I have last written, I have done much work on the reactor, including the addition of a new mounting system, based upon an old scroll saw stand, and the completion of the deuterium system. Also, the neutron detection system was completed. 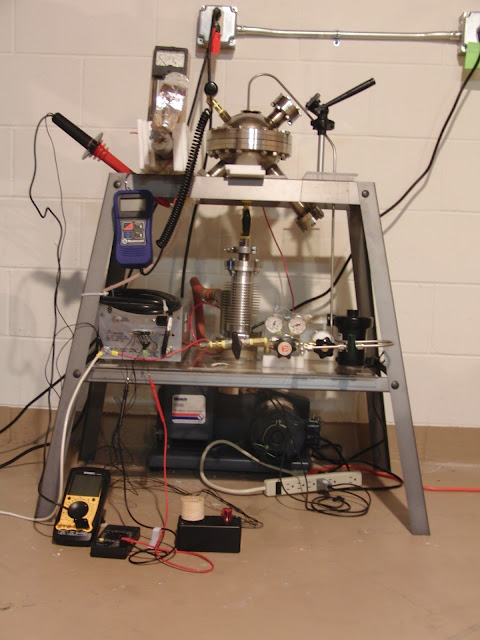 Here is a picture of the full reactor.
The new detection system utilizes a boron-10 lined proportional tube, which can detect thermal neutrons, however, the neutrons from the D+D -> He-3 + n reaction have very high energies, and therefore must have their energy reduced prior to entering the tube. Therefore, the tube is placed inside a HDPE neutron moderator, which reduces neutron energy through elastic collisions with protons inside the moderator. The tube is read by a Ludlum Model-3. 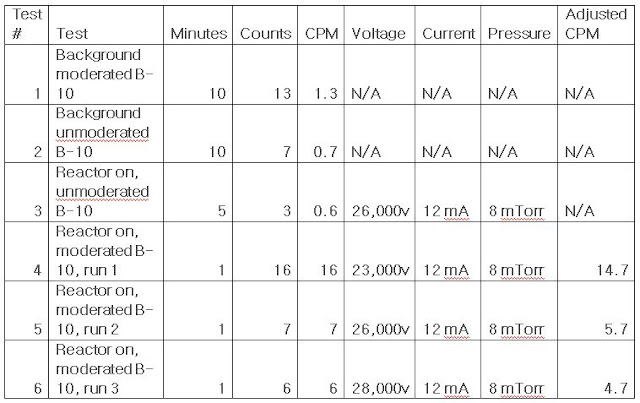 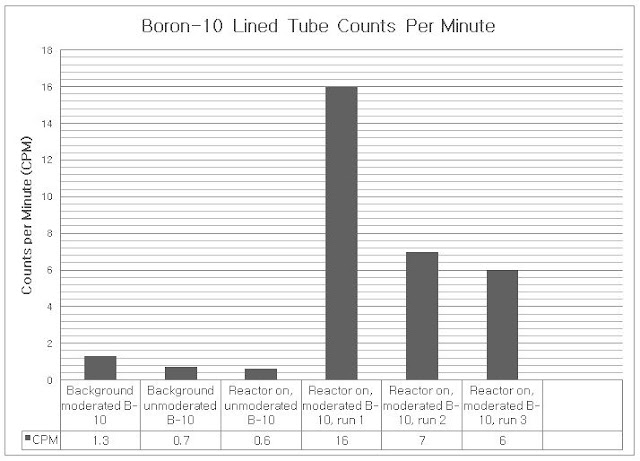 Due to the lack of the increase between tests 2 (background, unmoderated) and 3 (reactor on, unmoderated), it can be known that the tube was not detecting x-rays or EMI from the fusor, and that any recorded count would be due to neutrons.
The following three tests, (4-6, reactor on, moderated) show a large increase over background, indicating that the reactor was indeed producing a measurable neutron flux, and was indeed working!

And finally, some pictures of the reactor 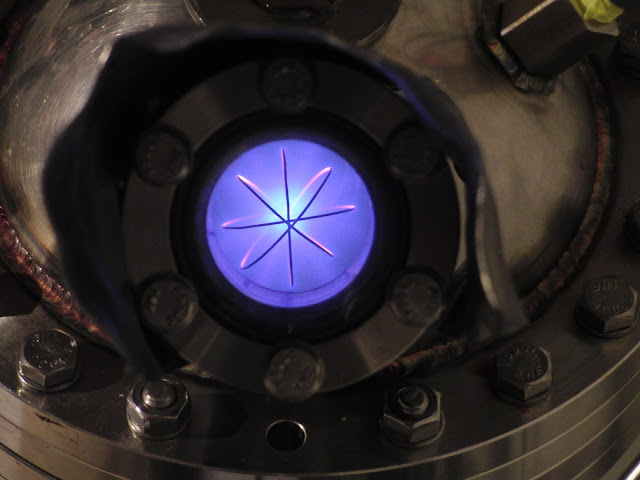 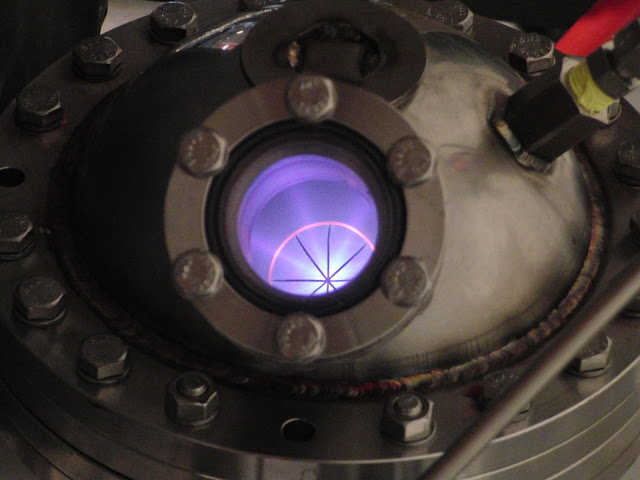 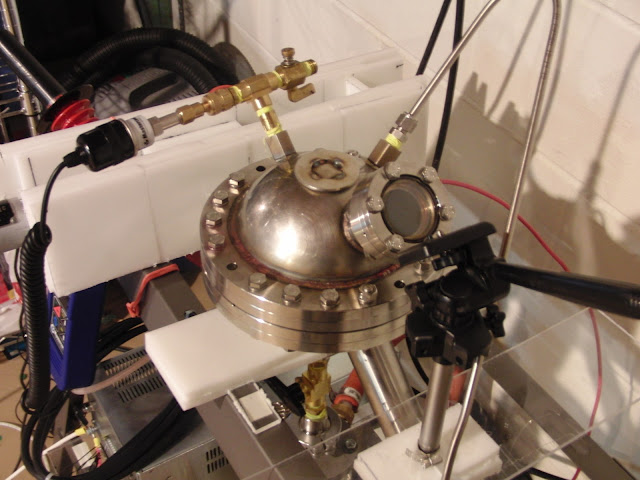 It's been a while since I've written, school and other commitments have continued to devour my free time.
It's good to be back.
Since I left off with my last post on my Mk.II reactor, I have made much progress. I have had the chamber machined, gone through two different power supplies, acquired a bottle of deuterium, and gotten an ultra high vacuum system working.

Before I go into any more detail on my current apparatus, I'm just gonna recap how the fusor works in Layman's terms:

The vacuum chamber is pumped down to a very low pressure, and a high negative voltage is applied to the inner grid, which is a spherical electrode in the center of the chamber. The outside of the chamber is left grounded. Due to electrostatic field emission from the grid, the gas in the chamber is ionized, forming a plasma. These gas ions are positively charged, and due to the inner grid's strong negative charge, they are accelerated towards it. In the center of the grid, some of the ions collide. If the gas in the chamber is deuterium (hydrogen-2), the two colliding deuterium nuclei will fuse into a helium-3 nucleus and eject a fast neutron. The nucleus then will remix with electrons emitted from the grid and become neutral.

Just to start off, here is a picture of my current setup: 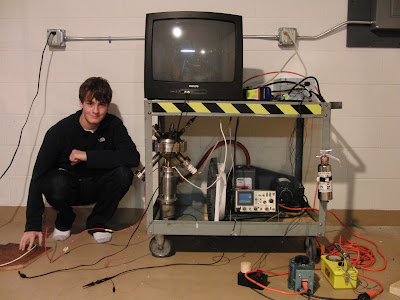 .
Now for a quick walkthrough of the different sections of the reactor... 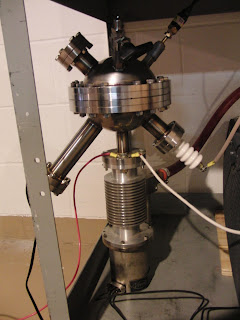 The reactor's stainless steel, spherical chamber was machined with the help of Tom Egan at Mercury Machine Company's machine shop, and my deepest thanks goes out to them, I really couldn't have done this without their excellent work. The chamber has a 1.5" wide viewport, a high voltage feedthrough port, a port connecting to an air cooled diffusion pump, a 6" long tube for a future ion source, additionally, there are two 3/8" NPT ports on the top of the chamber for vacuum gauging and a soon to come gas system. The flanging on the chamber is a mixture of commercial and custom hardware. Both the pump flange and the feedthrough flange are ISO-esque flanges in which an o-ring is pressed against a flat plate, forming a seal. The 8" diameter flanges holding the halves of the chamber together, as well as the 2.75" flanges on the ion gun tube and viewport are conflat-type flanges. In a conflat flange, a copper gasket is pinched tightly between two "knife edges" on either flange. This creates a very strong seal between the flanges. 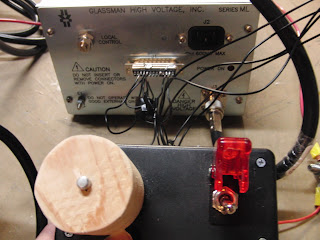 Originally, I had planned to use an x-ray transformer to power the fusor, and later I decided on using a two stage, lines frequency voltage multiplier to run the reactor, constructed of 2 stages of 2 banks of 16 microwave capacitors, driven by a few neon sign transformers (In the future, I plan to use this supply, however with a distribution transformer powering it). However, recently, I was graciously given a 30kV Glassman high voltage power supply, which I currently am using to power the reactor. The
supply uses a simple D25 connector to interface with a simple controller I made for it. 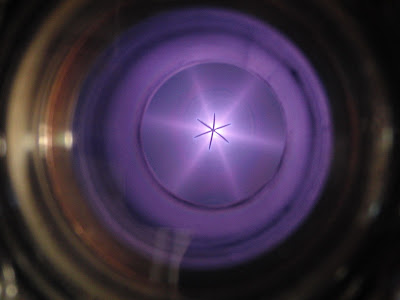 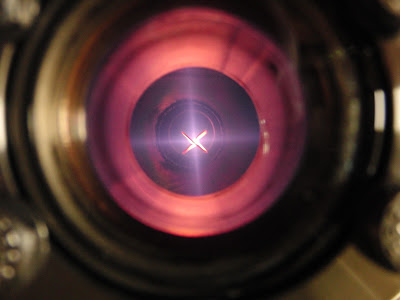 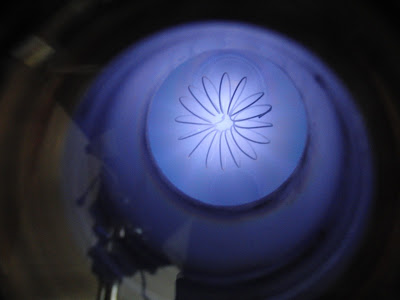 I recently shot a couple of videos of my air cannon and put them in a compilation. The camera used was a casio Exilim Fc-100.

It feels nice to be writing again. Since my last update I have acquired a 75kV x-ray transformer, as well as all the parts to make my vacuum chamber. I also got a Veeco EP-2A air cooled diffusion pump. Inconveniently, both this pump and my HV feedthrough require custom flanges to be machined. The plans for my new chamber are below. 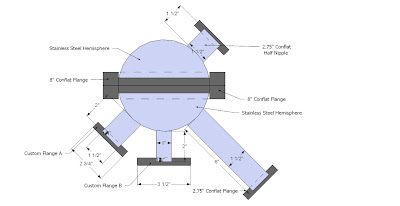 In the plans, the HV feedthrough port is the lower left one, the diffusion pump port is the bottom middle one, and the long one on the bottom right is an ion gun based on a DC magnetron, which is not shown. The DC magnetron is unlike it's cousin, the cavity magnetron, which creates microwaves, whereas the DC magnetron helps ionize gas by setting electrons into a spiraling path. Inside the source, there will be a 6"x1/4" rod charged to 3-5 kV. The magnets will surround the source partially, or I will use a large electromagnet wound around the source.. The 30kV will be generated by a 15kV NST (floating center tap) run through a voltage doubler constructed of microwave oven capacitors and diodes.
I have also decided that I will leak deuterium into the chamber through a 5 micron wide orifice on the ion gun. The deuterium will first be regulated down to 5 psi from tank pressure by a hydrogen regulator, and then it will pass through the 5 micron orifice and through a ball valve.
To detect neutrons, I will be using a much cheaper approach than the normal bubble dosimeter or a He-3 or B-10 tube. I will be using a cloud chamber to view proton recoil from neutrons as they pass through a hydrogenous moderator. The chamber will be lead shielded, allowing only strong cosmic rays and neutrons to pass into it. There will be a piece of LDPE inside the chamber to allow for the proton recoil to occur. Below is a picture of proton recoil tracks in a cloud chamber.

Sorry I haven't written for a while, but the science fair and school have completely consumed my life.


This is just a quick update on the fusor.
I am currently upgrading my vacuum system and and adding in a diffusion pump, which is a type of high vacuum pump used in series with a mechanical pump, this pump should allow me to reach pressures of less than 1 millitorr. I am also going to build a 50kV/5mA power supply, which should allow me to do fusion. I am also building a 6", spherical stainless steel chamber, complete with conflat high vacuum flanges, a nice high voltage feedthrough, an ion source operating off the magnetron principle, and a nice viewport.
Recently, I also entered my fusor in the science fair as part of a project titled "Effects of an Outer Grid on an Inertial Electrostatically Confined Fusion Reactor", and I received many awards!
I received the following awards:
I also received a perfect score at states, meaning my work will be published in the Ohio Academy of Science's Publication. And I will attend a Junior Academy of Science Conference in D.C. 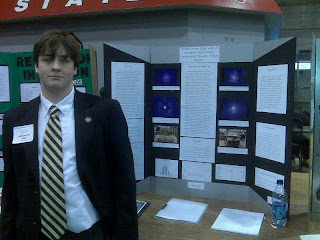 Me at states in front of my project
Now for some pictures of the fusor, these were taken during, or just prior to, it's last run before being critically damaged. 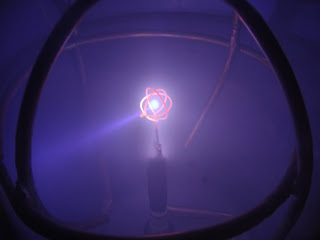 This picture is my favorite, makes an excellent desktop background 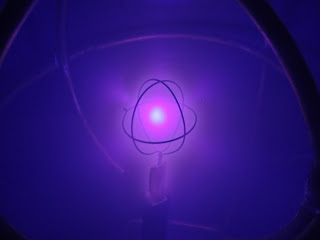 Another one of my favorites, camera is looking down an e-beam 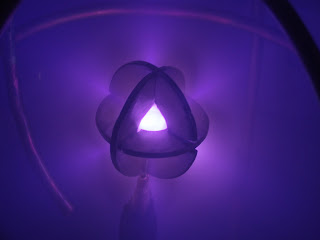 Yet another of my favorites 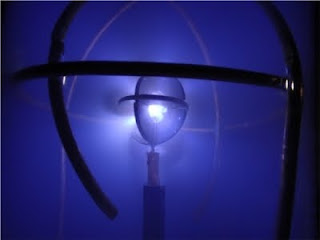